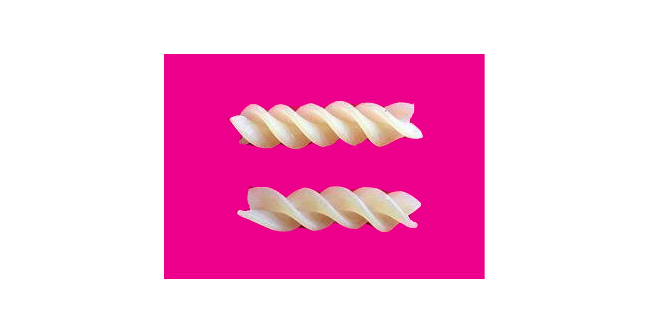 Now we have “gay pasta” used to promote and proudly represent the decline of western civilization.

I know, I know…this is getting old. Everything is gay this, LGBTQRSTUV that.

And that’s part of their plan: The “Forces of Tolerance” and Orwellian liberty aim to wear us into submissive compliance over the long haul by relentlessly attacking while simultaneously perpetuating the myth of their “inevitable victory” throughout the culture.

Because they believe in their religion and its cause.

And we do not believe in the God we claim with our lips, songs, and Sunday services.

They believe in their “inevitable” culture-wide victory.

And we tend to agree with them on that one.

Through secularized, sequestered, and sterile religion masquerading as “good conservative Bible-believing Christianity” in America, the professing church has acted as little better than an escort service for the militantly anti-Christian worldview that is now touring, pillaging and transforming the culture.

Today’s example of this ongoing and (temporarily) lopsided culture war comes via The Washington Post today, who reports that yet another corporation has been converted to an actively pro-perversion perspective:

“. . . in a sign of how toxic it has become for a company to be viewed as unfriendly toward gays, Barilla has made a dramatic turnaround in the space of one year, expanding health benefits for transgender workers and their families, contributing money to gay rights causes, and featuring a lesbian couple on a promotional Web site.

Barilla has journeyed from gay rights pariah to poster child — on Wednesday it received a perfect score from a prominent gay rights group that rates companies on their gay-friendliness. It is an about-face that highlights how companies, which typically shy away from controversy, are increasingly being forced to take sides in the cultural battle over gay rights and same-sex marriage — and how decisively pro-gay forces have gained the upper hand.”

The whole article is well worth a gander.

It is detailed and paints a very dark picture of our present condition, without realizing it or intending to do so, of course.

These anti-Christian activists are serious, passionate, and committed.

And they are in the process of rolling over and through the entire culture, reshaping it in their aggressively anti-Christian wake.

So when will this gayness end?

It’ll only get worse and worse…

…at least that’s what the Forces of Tolerance want you and I to believe.

Amazingly, many professing Christians share that perspective, and are “fighting the good fight” accordingly, which is another way of saying that they are barely fighting at all. They’re just going with the downward, drain circling flow, waiting for Jesus to come and do what He has commanded them to do through the Gospel-fueled Great Commission (see: Matthew 28). They are even happily investing and partnering with most of these now openly anti-Christian corporations as a means by which to preserve or enhance their own wealth and comfort.

That’s where we are…and it is the professing church that has gotten us here.

But even that betrayal has been purposeful. Even this desperate time will ultimately glorify God perfectly and benefit His true and faithful people eternally.

The most important question facing us now is not “What are the conservatives, or the libertarians, or the moralists, or the [insert favorite secular group here]  going to do to solve our massive, rapidly metastasizing and ultimately terminal cultural problems?”

The most important question is this: Will the true Church finally lead this culture in broken repentance and take up the Gospel-fueled Great Commission as the one and only true solution available to this dying land and its people? Will we boldly proclaim and apply the lordship of Jesus Christ in every realm of His creation right here and now?

Or will we just keep on going along to get along, pretending we are honoring God by playing nice and being kind as the world defines niceness, kindness, and everything else?

The answer to these questions will determine the fate of America and our children.

May God grace His people with the courage, appetite, and opportunity to stand now…while there is yet time…

To learn about making a much appreciated (and much needed) financial contribution to the FBC cause, please click here.