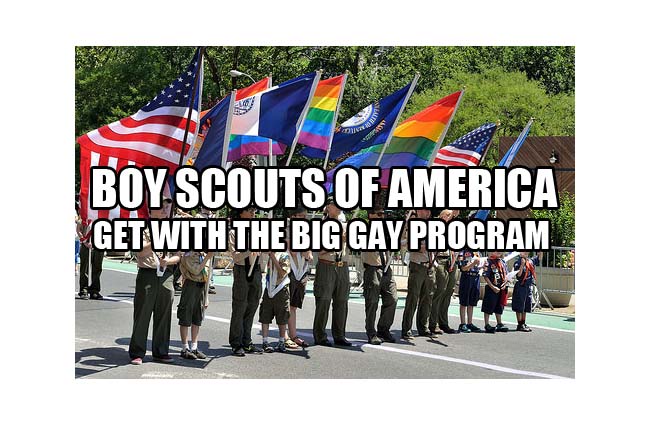 Don’t get me wrong: It’s pathetic, sickeningly sad and evil, too. It’s just that in our current All-American pride-fueled rocket ride to oblivion context, the capitulation of the Boy Scouts of America to the Big Gay Wave is anything but surprising.

After all, we’ve already rolled into Transgender kindergarten here in “the land of the free” and the home of the NSA. (See: And now for “Transgender” Kindergarten, as brought to you by…American “Christianity”.)

We’ve even got “legal” gay marriage. (See: “Supreme Court” Votes for Wrath of God Upon America.)

And of course we’ve long had such satanic gems as “legal” child sacrifice enshrined in ‘Merica. (See: Note to ‘Merica: There is no “God-given right” to murder children. Repent accordingly.)

So in a land currently loaded with discussion as to how “terrible” the sale of carefully preserved baby body parts extracted from healthy little babies is “wrong” while the practice of murdering those babies by the millions for profit and convenience in the first place is “legally” protected here in the name of “freedom” and “liberty”, how much buzz should Gay Scout Master news really be expected to generate? (See: Selling murdered baby parts in America? Sure. Why not?)

Not a lot, and what little it does will be gone before you know it.

Even so, we should note this sad, painful news and take it in as the latest bit of hard evidence that our oh-so-proud culture is on a bullet-train to hell riding on a ticket bought and paid for by a professing Christian church that has abandoned the Gospel-fueled Great Commission. (See: Judgment begins with the Church…not the Democrats.)

As reported yesterday, the Boy Scouts of America has ended its blanket ban on gay adult leaders:

The new policy, aimed at easing a controversy that has embroiled the Boy Scouts for years, takes effect immediately. It was approved by the BSA’s National Executive Board on a 45-12 vote during a closed-to-the-media teleconference.

“For far too long this issue has divided and distracted us,” said the BSA’s president, former Defense Secretary Robert Gates. “Now it’s time to unite behind our shared belief in the extraordinary power of Scouting to be a force for good.”

And who (or Who) defines good, exactly?

The Boy Scouts of America?

Or maybe America itself?

Or maybe each one of us get to do that individually?

That’s the idea here – the presupposition underneath it all: The idea that man or groups of men can define and then apply standards of goodness apart from the nature of God as revealed in His Word. (See: Presuppositional Law: Where we begin with law determines where we end.)

That’s why freedom, liberty, justice, America and the Boy Scouts of America are all dying.

As long as we imagine that anything – liberty, freedom, law, family – can be defined apart from the Nature of God as revealed in His Word, we will continue to consign those things and all that they touch to darkness and death.

There is no true life, no true liberty and no true pursuit of true happiness apart from explicit subjugation to Christ as King in practice. There is no lasting joy or goodness or prosperity of any real sort apart from submission to His Nature as clearly and lovingly revealed in His Word. (See: Art, math, beauty, logic, law and economics…it’s all about Him.)

That seems to be the great the lesson of America…and the Boy Scouts of America.

Let’s hope and pray that the Church is paying attention. (See: Roaring into Post-America Christianity.)