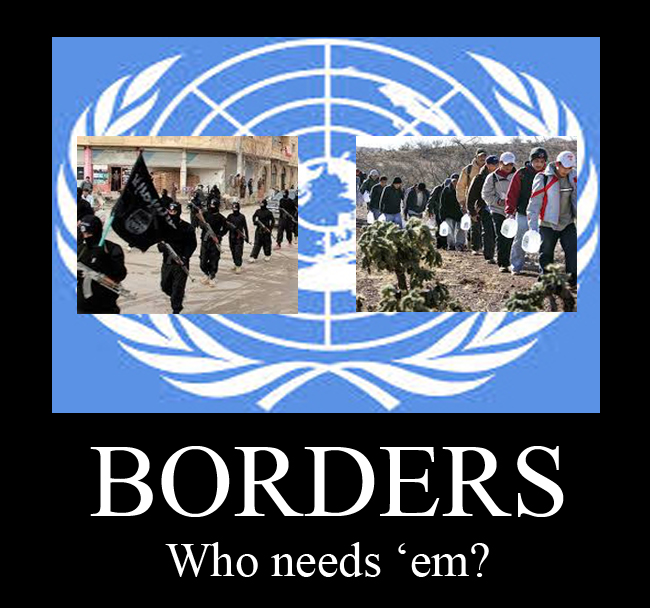 What if I told you that the southern U.S. border crisis, the pending U.S. invasion of Syria, the ongoing murderous rampage of ISIS/Islamic State in Iraq, and the pending eruption of similar acts right here in the U.S. were all clearly and purposefully connected?

Or, if you’re not at all like me, you might think that even the suggestion of such a thing was flat out nuts.

Either way, for those of you who missed yesterday’s post (Problem>Reaction>Solution – Why we will beg to have our freedoms taken away and go to war forever.), I’d strongly encourage you to pause and have a look-see at that one before diving into what we’ll be covering the rest of the way here.

In an article posted by Reuters earlier this week, we learned about our impending dismissal of Syria’s national borders so that we can wage war on ISIS (who we first funded and fueled for the purpose of waging war on Syria and overthrowing it’s government):

General Martin Dempsey, chairman of the U.S. Joint Chiefs of Staff, suggested Islamic State would be a danger until it could no longer count on safe havens in Syria.

“This is an organization that has an apocalyptic, end-of- days strategic vision and which will eventually have to be defeated,” Dempsey said.

“To your question, can they be defeated without addressing that part of their organization which resides in Syria? The answer is no. That will have to be addressed on both sides of what is essentially at this point a non-existent border.”

Our southern border, to be more precise-ish.

So it is that we see roughly equal dismissal for both the Syria/Iraq and United States/Mexico borders.

But the similarities don’t end there. Oh now, it gets much, much more interesting…

You see, we “must” wage war in Syria, or so we are being told, and that will obviously require our ignoring that nation’s border.

What is interesting in a this-would-be-very-funny-if-not-so-very-tragic sort of way is that we wanted to go to war in Syria last year, too. Only that time we “had to go to war” to overthrow the Syrian government, and we “had to” do this in large part by funding, training, and supporting our hand-picked “freedom figher” friends…ISIS.

And here we come upon another would-be-tragically-comedic-if-not-so-truly-horrifying bit of overlap between the US/Mexican and Syria/Iraq border situations.

As Breitbart reported just the other day in what amounts to something not quite qualifying as a mind-blowing newsflash: It is “very, very true” that ISIS militant types may have crossed into the United States through our wide-open southern border.

Gosh golly, it’s as though our “leaders” are so incredibly incompetent and are such complete morons that they are unwittingly helping ISIS/Islamic State/al-Qaeda!

Like me, you may be under the impression that we have what some folks call a “border problem” here in America.

You may also have noticed and become more than a tad frustrated by how both Republican and Democrat leaders, when they actually have the power to do something about it, all tend to magically employ very similar approaches to the “problem”…at least when measured by results over rhetoric.

How weird is that?

Even more weird and frustrating is that their “solutions” – both Republican and Democrat solutions – all tend to be aimed at making the problem much, much worse, at least from my perspective (and probably from yours, unless you are the head of a large corporation or business (or a stock holder in the same) who profits greatly from the influx of cheap labor and the suppression of masses of legal US citizens to the point that they are driven into State dependance).

I mean, they say such different things…how come they seem to disagree sooooo much in word yet find such harmony in deed? And how come that harmony of action always seems to make the supposed “problem” much, much worse in pretty much the same ways each and every time a Republican or Democrat “solution” is put into play?

I mean, it’s almost like these Republican and Democrat leadership guys and gals are all on the same team or something?

And…heh! heh!… how ridiculous is that idea?!

I mean, the Obamas and the Bushes and the Clintons all on the same team…that’s just crazy!

Barack Obama, George Bush (either one), Hillary Clinton, John McCain, Bill Clinton, John Kerry, Dick Cheney, Karl Rove, Jeb Bush, Mitt Romney…they definitely make a lot of noise aimed at convincing folks that they’re wanting to lead in different directions for different reasons and toward different destinations. But, at the end of the day, when we have the guts to stop and take a serious, sober look, the actual marching of this group sure seems pretty close to lockstep toward a vision that looks a whole lot more Brave New World

than it does anything by Norman Rockwell.

Who wins if Islamic State types enter the US, blow something up, and/or lop off some American heads on American soil and then broadcast it all on American YouTube?

The American State, that’s who.

And the American State is not to be confused with the American people, however much your State-controlled “educations” may have programmed you to believe otherwise.

Why is the underwear of American citizens checked for al-Qaeda when they want to travel through an airport in the American heartland, but the southern border is swung wide open to anyone who can hop, skip, or giggle across the now-nonexistent boundary?

Why is every phone call and email of American citizens monitored and stored in a manner that would make the Gestapo or KGB drool, but the physical invasion by immigrants through our southern border goes on and on, not only unimpeded, but encouraged and subsidized by the very government charged with the task of protecting that border and protecting the privacy of its citizens?

Why is there not a peep from past Republican Presidents George Bush (either one) as all of this happens?

The answer is simple: The NSA and American Security State, long nurtured and cultivated by globalist Republican and Democrat “leaders” for decades now, is not made to be deployed against “those terrorists” that are now streaming into the country with minimal, if any, resistance. The Republican- and Democrat-built American Security State is aimed at us – law abiding citizens; particularly at Bible believing Christians.

When – not if – there is a “terrorist act” perpetrated, whether it is said to have been committed by some ISIS-type who easily strolled in from overseas or a “home grown” radical right winger type, the end result will be the same: We will be cracked down upon, and hard.

Our liberties will go.

Our freedom will die.

Nations will fall. Globalism will advance.

New war(s) will be launched and old wars will be further justified.

And George Bush, Karl Rove, Barack Obama, Hillary Clinton will all be very, very happy…and better positioned than ever to “lead” an increasingly enslaved and dependent people.

The most sickening part of it all is that, as per the Problem>Reaction>Solution method of mass manipulation, this will all ultimately happen because we will have been programmed to beg for it to happen.

So who needs borders, anyway?

Globalists are all about the future. Our future. Under their control.

And apparently, since we keep right on supporting our favorite globalists in the Pro-Wrestling style arena of controlled American politics, we must actually want our children and grandchildren living more and more completely under their control, too.

I hope and pray that last part isn’t true, but based on the slavish devotion of most professing Christian conservatives to the controlled, contrived world of talk radio, FOX News, and long entrenched conventional, top-down political activism through the Republican Party.

Just so ya know, I was once such a slave.

I once believed that the best – the “most pragmatic” – way for us to make positive change here on this earth was to play the way the world wants us to play – by its rules and according to its principles.

Now I know that all of that was one large, entangled, and very tempting bundle of lies. (Please see the post 7 Empowering Truths for Politically Active Christians for more clarification on this important subject).

Where once I believed – as the world would have me believe – that top-down pragmatic political action could restore our culture, I know now that precisely the opposite is true: Only the bottom-up, one individual at a time supernatural conversion through faithful proclamation and application of the whole, undiluted Gospel of Jesus Christ can save us.

It is our only answer.

It is our only hope.

And that is exactly why our favorite globalists will steer us away from it at every opportunity.

So man up, people!

Stop voting for it!

Stop expecting unbelievers in conservative talk radio to “have the answers” when those answers never, ever, EVER include the Gospel!

We have to stop setting His truth aside for the “truths” of vain, secular, man-centered ideas. Whether these man-centered “solutions” flow from the mouth of Rush Limbaugh or the dictatorial pen of Barack Obama, they will all ultimately lead us to the same place.

We have to start acting as though Christ and His Gospel are the perfect, essential starting point and ongoing basis for life in all of His creation…including America right here and right now.

When His people start actually believing these things, we may then, and only then, finally see something truly good come over and transform our dark and dying land…by His grace and for His glory.

If you think this message would be helpful or interesting to others, please share it. Thank you.

Problem>Reaction>Solution: Why we will beg to have our freedoms taken away and go to war forever

The America Idol (Or: How I Learned To Stop Worrying and Love The Almighty State)

Shields Up! Ready Weapons! The Globalists are De-cloaking!