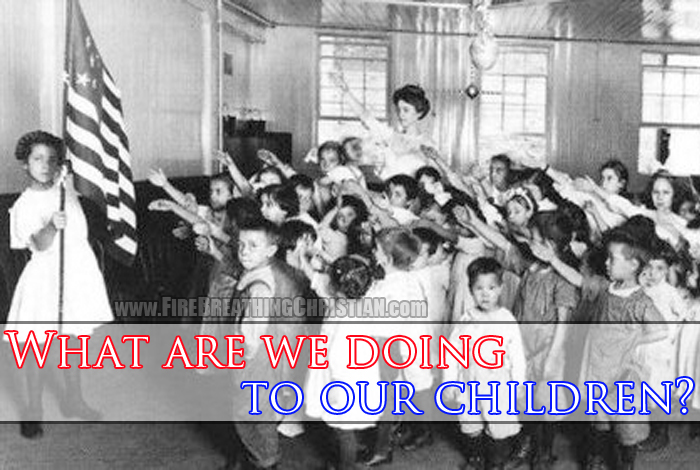 Let’s face it, America hasn’t been serious about leaving “a better life” for upcoming generations for a very, very long time now. To pretend otherwise is a bizarre, cruel, and destructive fiction.

But pretending is what we’re into; it’s one of the few remaining things that we really work at here in a “land of the free” where you can’t even own a home outright (the State actually owns your home), you’re “free” to murder your own child for convenience, and you aren’t even entitled to have a private phone call or email (hey there, NSA, how ya doin’?).

And let’s not forget the biggie that makes all of this “freedom” possible: You are “free” to worship any false god, goddess, animal, plant or mineral that you wish, so long as you keep said worship in its proper place underneath the real-world ultimate authority of the almighty American State. (See also: The State as God in practice.)

So if you’re a newborn just heading into this mess or a young adult beginning to get a feel for how far down the river you’ve been sold, the ground-level reality you’re actually living in sure doesn’t gel much (or at all) with the propaganda flowing around you. It’s okay to notice, but you’ll need to learn a few things as you plan how to communicate your concerns, including: Self-identified conservative Christians in America are more often than not both A) incredibly socialist/Marxist/satanic in economic/governmental/educational practice, and B) every bit as much into “safe spaces” and shouting down those sharing truths they just don’t wanna hear as the “idiot liberals” they like to whine about.

Put another way, many of the “conservative Christian” people who worship America and are counting on Donald Trump and Rush Limbaugh to make her great again are the same folks who sold you up the river a loooooong time ago and aren’t about to repent and own up to it now. They want their public schools, Social Security, Medicare, Medicaid, unemployment payments, disability payments and giant war machine, and they’re willing to do whatever it takes to keep that train a-rollin’.

And “anything” includes both lying to you and selling you out.

That’s how we’ve been “taking care” of future generations in America for a good long while now.

For ages, America has been about the business of building Socialist construct upon Socialist construct and Marxist principle upon Marxist principle while embracing satanic concept after satanic concept (like the “freedom” to openly worship Satan or murder children for convenience, for example). After 100+ years of this clever approach, we’ve predictably found ourselves on the precipice of cultural implosion, making us easy marks and compliant prey for an Orwellian American State…which just happens to be conveniently be rising up all around us.

What a coincidence, huh?

Funny how that happens.

So it seems quite rational, reasonable, and fair to notice and even say out loud that along the way these past 100 years or so, we’ve pretty much raped and pillaged our own children, grandchildren, and the generations to come after, all for the sake of propping up the mountains of lies upon mountains of lies that now define America.

It’s in this context that we ought to consider the ongoing talk/concern/propaganda about how we, as Americans, are “committed to leaving our children in a better position than we were born into”.

Somehow, this line has managed to find currency (again and again) over the course of our multigenerational decline, even though, by any remotely biblical standard of measurement, we as Americans haven’t been seriously about the business of leaving our children in a stronger position than us for a very long time now.

Unless you redefine what things like “better” and “success” mean.

To go along with our redefinitions of “freedom”, “liberty”, and “justice”, of course.

And, well…you get the picture.

So when we hear someone bemoan the sad reality that “for the first time in our history” we are not going to leave things “better for our children”, we need to tap the brakes and kindly (but firmly) confront those casting this line our way by reminding them that we haven’t had older generations look out for younger generations that way in America for longer than any contemporary American has been alive. (Not in the general sense, anyway. There are, of course, grace-fueled exceptions as God faithfully preserves His remnant.)

If we had been looking out for or caring about our young that way, we wouldn’t have the Federal Reserve, fiat economics (which produce fiat slavery by design), the welfare state, the warfare state, the CIA, the NSA, the public schools, the New Deal, Social Security, property tax, Medicare, and the giant, globe-spanning war machine that we have (and totally cannot afford) spread over God’s green earth.

But we do have those things, don’t we?

And those things do define America, don’t they?

They are what our flag and our empire actually stand for, aren’t they?

In this context, let’s consider some questions:

When you and I are gone, what will our legacy be to those who come after us to take up the next phase of Kingdom building, whatever may come of America?

Will our children inherit a deep, strong, powerful faith and the solid, Christ-centered approach to politics, law, economics, art, and education that comes with it?

Will the culture erode under our watch?

Or will it instead, by God’s grace, find the beginnings of true hope and real restoration during our time of working here?

If the broader American culture continues its pride-fueled descent into the ashbin of God’s creation of history, will our children, grandchildren and great-grandchildren inherit from us the equivalent of cultural and civilizational life boats built upon the Word of God so that they might thrive even as the rebellious are washed away around them? (“As in the days of Noah”, you might say.)

How far will the Kingdom of God advance in the realms of politics, economics, law and education during our time on the front lines?

Will we advance the line against the enemy in the realms of liberty, justice and economics?

Or will we remain mired in the powerless, pessimistic, pathetic theology of preemptive surrender that has defined American “Christianity” for the past 100+ years, leaving things to only get worse and worse during our time here?

Are we being true to King and Kingdom as if we actually believed in them?

Are we living out the Gospel-fueled Great Commission with everything we’ve got?

These are questions we should be asking and pondering as we pave the way (up or down) for our Christian children, grandchildren, and beyond.

Yet we’re not inclined or encouraged to think of these things often, if ever. We’re not prone to think much at all in any kind of detail about generations that are likely to arrive long after we’ve left the scene here on this side of eternity.

But our great-great-great grandchildren? Pfft! No such worries.

We’ll be long gone by the time they roll around, which is why we tend not to even think of our obligation to them as real. Out of sight, out of mind.

But our obligation to them is real nonetheless.

Just as real as our obligation to God to pursue His comprehensive, everything-touching, Gospel-fueled Great Commission. (Though we don’t tend to think of that as being very real either these days, do we?)

While we may have abandoned the multi-generational aspect of the Kingdom of God and the Gospel-fueled Great Commission, our enemies most certainly have not.

They understand and greatly appreciate the value of long-term, multigenerational visions and strategies.

Just look around “the land of the free” and see for yourself.

Look at the child sacrifice facilities operating openly in far more brazen a manner than any concentration camp in Nazi Germany.

Look at the public schools, where the satanic model of the pursuit of knowledge is the foundation of every educational pursuit.

Look at the Social Security, unemployment, and disability checks that so many depend upon.

Look at the giant military abroad and increasingly militarized police at home.

Look at the NSA (and know that they’re lookin’ right back atcha).

Look at the fake-money-fueled, fiat-slavery-enabling economic construct that fuels all of these programs, systems, schools, weapons, wars, dependence and more dependence.

Look at all of these things and realize that this is what we’ve been doing to generations of young Americans for a very long time now.

This is what young people have been born into in America for many generations now.

This is what has been done to them. (All in the name of “freedom”, of course.)

Then, if and when God graces you with proper brokenness, repent and pray for Him to use you to help produce the reformation and revival that is needed right now to wash it all away.

Starting in your life and your home.

Starting with your family.

Starting with your church.

Then live accordingly in everything that you do…all by His grace, all for His glory, and all to the eternal benefit of His people, including generations of Christians (and Christian victories) to come.