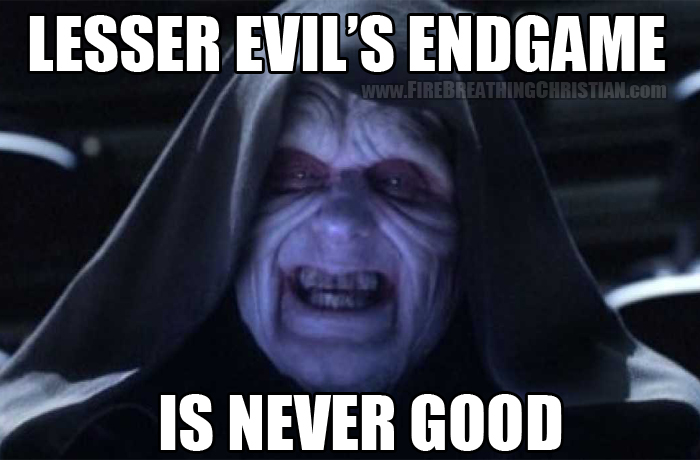 If American Christians feared the Lord half as much as they fear Hillary Clinton, American culture would experience a revival the likes of which the world has never seen.

But if one thing has been made crystal clear (yet again) by the grace of God through this particularly dark comedy known as the 2016 presidential election cycle, it is that the vast majority of self-identified and politically active “conservative Christians” in America are far more fearful of losers like Hillary than they are fearful of the Lord. We may loudly and proudly claim to love Jesus with their lips, but when it comes to obedience to His Word in political, economic, legal or educational practice, we seem to have no appetite for His lordship, no desire for application of His Word, and thus no real hope for advancing His Great Commission and disciplining the American culture that we also claim to love so very much.

Where God speaks clearly in loving detail, American professing Christians tend to look for any other way to “solve problems”. Where King Jesus gives clarity, most American Christians seek instead the paths charted in accordance with secular pragmatism. When the Creator and Sustainer of everything speaks with clarity, American Christians tend to…well, just make another vague reference to God or how they “love Jesus” or some such thing, all while dutifully ignoring and modelling rebellion against His crystal clear pronouncements on matters central to the terrible situation in which we now find ourselves, including:

Moreover, look for able men from all the people, men who fear God, who are trustworthy and hate a bribe, and place such men over the people. . .

American professing Christians – most of us anyway – simply don’t believe this. And, as a result of our unbelief, we’ve modeled rebellion against the Word of God and escorted our “beloved” American culture to where it is now.

Clinton/Trump should not be surprising to anyone.

They are both clear expressions of the hard-earned wrath of God that is now falling upon us.

The fact that American Christians have been convinced to rally in massive numbers around a proud, unrepentant, biblically illiterate, vice-peddling, woman-hating pig to “save them” and “make America great again” is no surprise. Once the “lesser evil” model replaced the biblical model for leadership selection, we were destined for what we have now…and the much worse that’s right around the corner.

Want to save the culture?

Want to save America?

There are no other true paths to lasting peace, prosperity, security and success available anywhere in His creation. It really is as simple as that.

Even so, the Kingdom of God advances, whether America repents, believes, and is saved or not.

Lord willing, that repentance will come soon…before yet another “Christian”-led step is taken down America’s “lesser evil” stairway into darkness.