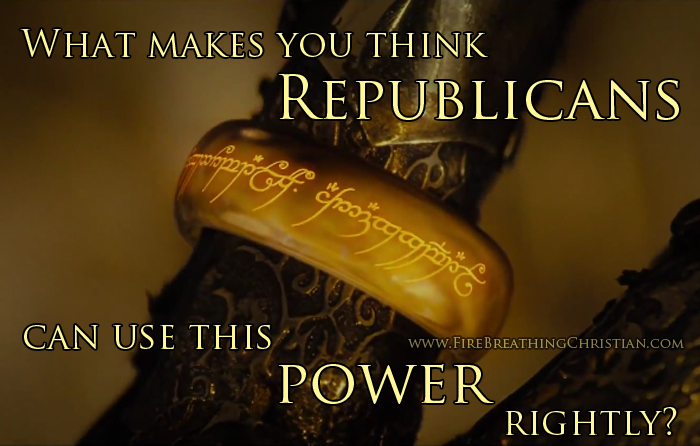 Can overtly unbiblical power be seized and reliably used for good?

Or must it be destroyed?

Can the intrusion of civil government into realms and areas of life beyond its very narrow, very small, God-ordained jurisdiction ever be expected to yield more help than damage or more good than evil in the culture upon which it is unleashed?

These are the sorts of questions we ought to be considering as we head deeper into another presidential election cycle in America.

These are questions and concepts that we ought to keep in mind as we are once again spun, poked, prodded, and programmed to just shut up and do the same ol’ same ol’ by electing yet another “lesser evil” who will absolutely not dissolve the Ring of Power by casting it into Mount Doom, but rather seeks our help in securing The One Ring for himself so that he can, in this instance, “Make America Great Again”.

But is the answer to Washington DC’s massive accumulation of power well beyond any biblical warrant something that we can really hope to correct by just electing another slightly less (?) evil to take The Ring, put on The Ring, and use The Ring?

Most American Christians seem to think that if only their team or their political party could have the wildly unbiblical power of The One Ring that Washington DC has so clearly come to represent, then they would somehow find a way to do more good than harm with it.

If only my man could get his hands on the unbiblical, population enslaving American welfare state…

If only my team could take over the privacy, liberty, and freedom eviscerating machinery of the American “security” State (think: NSA, TSA, CIA, etc.).

If only my political party could take the reins in Washington DC, we could finally steer all of this unbiblical power in a truly good and productive direction!

This is basically what’s being said by tens of millions of professing Christians every four years as America rolls through its regularly scheduled political puppet theater known as “the presidential election”.

As the political parties (and Parties) roll on and American politics continues on its normal, demonic, evangelical-leadership-assisted track, let’s remember these things and do what we can in our individual lives, our families, our homes, our churches and lour communities to work toward biblical repentance and reformation even as the proud, unrepentant American Titanic slips off to its (hard earned) watery graver beneath our feet.

Let’s remember that civil government has no business meddling in areas that God has not given to it.

When we allow individual government, family government, and church government to have their duties and responsibilities infringed upon by civil government, we get…well…America.

We get Social Security and Medicaid.

We get public schools.

We get “gay marriage” and the Republican Party.

And, of course, along the way we lose any real sense of privacy, liberty, freedom, security, prosperity and even life itself.

This is what The Ring of Power has given us, whether worn by Republican, Democrat, or Sauron himself.

The One Ring cannot be used for good, other than in the instance it is thrown into the molten core from which it came and is utterly and completely dissolved, separated from the power that tempts, warps, and destroys men and cultures.

Pray and work for men who might do that with The Ring.

Pray for men who would forego the power to “do good” through unbiblical means and seek instead to destroy the all-corrupting power of Washington DC over the people of America.

Pray that one day soon we might really and truly be freed of the “good intentions” of those who seek, with our help, to make the One True Ring their own.