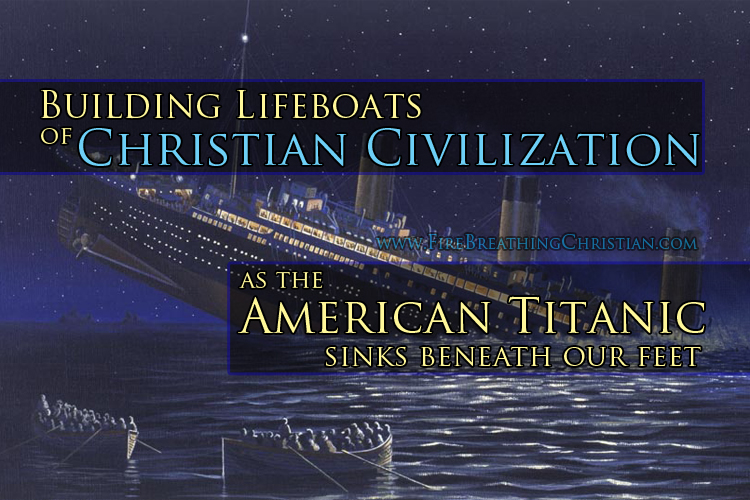 So what do we do now?

More specifically, what do we as Christians in America do right here and now in the time and place in which our King has perfectly and purposefully positioned us? Which is another way of asking what Christians living by God’s grace in 2016 and on board the terminally broken and steadily sinking American Titanic are to do with the incredible opportunities they’ve been given?

That alone – recognition of the great opportunity providentially swirling around and through the sinking wreck that is the American Titanic – is one great and beautiful truth that we need to understand and embrace. God really is in control here, His Kingdom really is advancing over and through the rubble of all would be competitors, and we’ve been placed here and now to do our part in what appears to be a breathtakingly significant period in history.

For that to happen as it should, we have to stop looking at America as our hope and living in fear of what is happening to The Titanic, and start looking to God as the perfect Sustainer and Provider of true peace, prosperity and security that He is. We’ll dive deeper into this important point later (and often).

Before heading into some specific suggestions as to how we might not only survive, but thrive through the passing of the Titanic, it’s important to note the comprehensive nature of the true Gospel and the role that America’s long running abandonment of that Gospel, culminating in today’s open disdain for the everything-touching lordship of Christ, has played a central role in breaking the American Titanic into pieces and sending her to the bottom of God’s sea.

The point here is not merely to note (once again, as we regularly do at Fire Breathing Christian) that America has broken itself upon the unbreakable Law of God, but to remind ourselves again of the indispensable nature of the true, life-defining (in every detail) nature of the Gospel, so that we might cling to it as the one and only true hope that it is for the restoration of men and all that men do, which comes together to form what we know as culture and civilization.

So point #1 as we get ready to roll into this multi-part pursuit of practical solutions and “lifeboat building” as America goes down below our feet is: Praise God! Praise Him for putting us here and now to do His work with His Spirit within us and His Word to guide us in accordance with His Gospel and Great Commission.

Point #2 then, is: We must understand that the Gospel, through its embrace or neglect, inherently defines all of culture and civilization.

Van Til said that.

The Puritans and Pilgrims understood it.

Christians in America used to actually believe it, too, long before the time of the American War of Independence from Britain, anyway. By the time that war had rolled around, we’d already drifted far from anything like the explicitly Christ-centered worldview that had largely defined the Pilgrims’ and Puritans’ (still imperfect, but vastly superior) approach to things like law and civil government. And the slide into darkness has only sped up since.

Fast forward to the present – 2016 America – and we have no trouble seeing how modern conservative American evangelical Christendom has largely abandoned that Gospel-fueled Great Commission perspective, often huffing and puffing stubbornly as it tries ever harder to distance itself from the comprehensive lordship of Christ that is Christianity 101 and the core of the Great Commission.

American conservatives shovel mountains of energy, passion, and wealth into organizations led by men and defined by worldviews that utterly dismiss (often disdainfully) the notion that supernaturally saved men and women inherently and inevitably improve the culture in which they live and that the Great Commission might actually be able, by God’s grace, to inspire the salvation not merely of people’s souls, but the restoration and reconciliation to Christ of all things that those souls touch (in accordance with Colossians 1:15-20).

Oh no, that approach to the Gospel and Great Commission – actually applying the lordship of Christ in detail as He has commanded and equipped His people to do in every realm of His creation, including education, art, law and economics – that approach to truth is anathema to even many of the most supposedly conservative, Christian, and even “Reformed” among us.

But however much the John Pipers, Albert Mohlers and John MacArthurs of the world may reject the all-encompassing, life- and inherently culture-reconciling supernatural power of the true Gospel, we have to stand and obey the King who really and truly has commanded and equipped us to “take every thought captive” to Him (2 Corinthians 10:5), which inherently means that we are to take every action captive to Him since thoughts fuel actions, which then must mean every legal, educational, artistic and economic thought is to be completely taken captive to Christ, all by His grace, all for His glory, and all to our benefit in accordance with His purposes and the inevitable success of His Great Commission.

And don’t get me wrong, I love and thank God for the likes of Mohler, Piper and MacArthur. That’s no joke and it’s not me “playing nice” to just meet some technical requirement for niceness. Oh no, I’ve learned a lot from each of those men and many like them. And when I say “a lot”, I mean it and am very thankful for it.

Even so, as I test their worldview in light of Scripture, I cannot help but find it profoundly deficient in ways that are directly related to the cultural carnage blowing up all around us right about now. These men and their pietistic, often comically over-spiritualized approach to engaging the material world comprise one of the most significant barriers between pursuit and application of the true, everything-defining Gospel and the world that is dying before our eyes.

So what do we do?

Well, in a nutshell: We love Jesus.

Oh, everyone says that, I know, but Scripture makes plain again and again that to truly love the real Jesus, one will strive to know and obey all of His commands in detail.

That applies to art.

So step one is to pray that God gives us the grace and strength to truly love Him by actually obeying Him.

What I’d like to do beginning in Part 2 is explain what that is looking like in my family and home.

While I very much hope to one day soon have the time to craft a comprehensive work (like maybe a book and/or video series) on what we can do in detail to confidently build and thrive as living conduits for Christian civilization and culture, I think that for now the best (and most practical) route for me to take on this subject is to try and explain what my family is doing, why we’re doing what we’re doing, how it’s going, and what relevant biblical principles might be taken and applied by those who are in very different situations and circumstances.

Before closing Part 1 here, let me plant a seed that will be central to future installments:

We are to be people of the Word.

This means, among other things, that we are to be able to understand, articulate and apply the Word of God. This involves language. More specifically: Our use of language.

While each of us have unique talents, gifts, weaknesses, and challenges where communicating is concerned, we as Christians must in general exhibit the highest regard for literary pursuit.

That love of learning and use of language will be center stage in Part 2 as I try to explain the ways in which we are striving, often failing, and sometimes by the grace of God succeeding in my home in at least beginning to build what I hope and pray will become a thriving lifeboat of Christ-centered culture and civilization. I also hope and pray that some of what I share will help you and yours to become more of the same, all by His grace and all for His glory.

With that seed planted, I will look forward to continuing this train of thought soon, Lord willing and work schedule permitting.

Please pray for Christ-centered wisdom as we pursue these thoughts together and please consider supporting this work if it is profitable to you.

Thank God for placing us here and now for such a time as this!