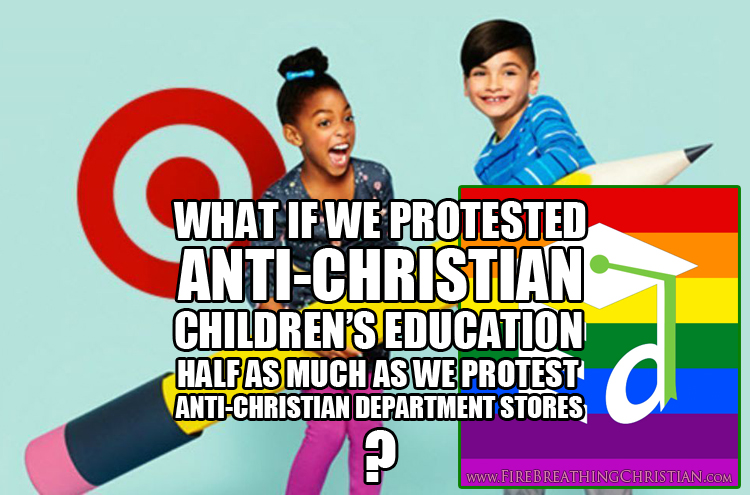 One of the telltale marks of a sucker is their propensity for easy distraction.

Can we be easily manipulated?

Are we emotion driven?

Are we disinterested in detail or consistency?

Are we happy and content to be spoon fed and led along by the nose?

If so, we’re a mark waiting to be taken advantage of…and we usually won’t have to wait very long.

This is why every detail of the perfect, sufficient Word of God is so valuable to us. It is the one and only objective, reliable foundation upon which we can build our everything with complete confidence.

One of the telltale signs of America having become a culture of thoroughly programmed drones and easily manipulated lemmings is our corporate desire to avoid dealing with unpleasant or challenging realities that we see clear enough peripherally to know that we don’t want to take an honest, straight on look, lest we have to actually do something hard or admit to having made the most serious of mistakes in the past. So we just pretend.

We pretend not to notice the obvious problems on the periphery of our vision and we focus instead on smaller, much more manageable distractions.

It is in this context that we might be well served to consider the recent boycott campaign against Target.

Don’t get me wrong, this boycott seems like a very good and noble cause as far as it goes. It’s good to see Christians consciously choosing to spend their money with the competitors of the most openly anti-Christian businesses in the land.

So I’m definitely not here to argue against the boycott – a boycott that has apparently accrued over a million participants and is already having a noteworthy impact on Target sales and stock prices.

What I am here to respectfully suggest for your consideration is the question: Why are we not treating much more serious things with half the vigor and passion that’s being poured into the (very reasonable and good) anti-Target cause?

Could it be that we are the easily manipulated marks and lemmings mentioned earlier?

Could it be that we find it far too hard to tackle the giant, gloating, child-eating, culture-destroying beast that is our beloved State-run anti-Christ children’s “education” system, so we distract ourselves and try to make ourselves feel better about “doing something” by tackling the easy, um, Target instead?

We did a satirical piece on this over at The End Times entitled “Outraged” Christian Parents Boycott Gay-Promoting Target While Happily Shipping Their Kids To Gay-Promoting Public Schools. It went over very well and is even now making people think and ask questions that The System doesn’t want us to think or ask.

We also recently posted a similar question-based article here at Fire Breathing Christian entitled If you’re so upset that your child’s school promotes the LGBTQ ‘Day of Silence’ on Friday, why do you keep sending them there?

So, with that noted, what if half of the loud, angry, Target-boycotting professing Christian parents of small children took their precious little ones out of the satanic system of indoctrination known as “public schools” tomorrow?

What if they simply had faith enough in the God they claim to love with their lips to actually trust Him and obey Him in practice?

What would that do for their children?

What would that do for our culture in the long run…and in the short run?

What kind of signal would that send?

How impactful would such a move be?

A lot more than shifting notepad and pencil money from Target to Wal-Mart, no?

But do we even want to make that kind of impact?

Do we really want to slay the dragon?

Or do we really just want to pretend the dragon isn’t there because we see no hope of slaying the dragon and are content to play the role of fierce and determined mouse hunter instead? Are we so weak and powerless before the dragon and so enslaved to the dragon’s ways that we no longer even want to think about resisting him?

There is no other real solution available to us or to our children, after all, whether we’re considering the subjects of family disintegration and gender chaos or children’s education and the collapse of morality in the land.

The sooner we repent and believe, the sooner we will be able to deal with the root of all problems: rebellion against Christ as King in practice.

And the sooner we submit to Christ as King in practice, the sooner we will most assuredly begin to slay every dragon temporarily rooting about in His land.