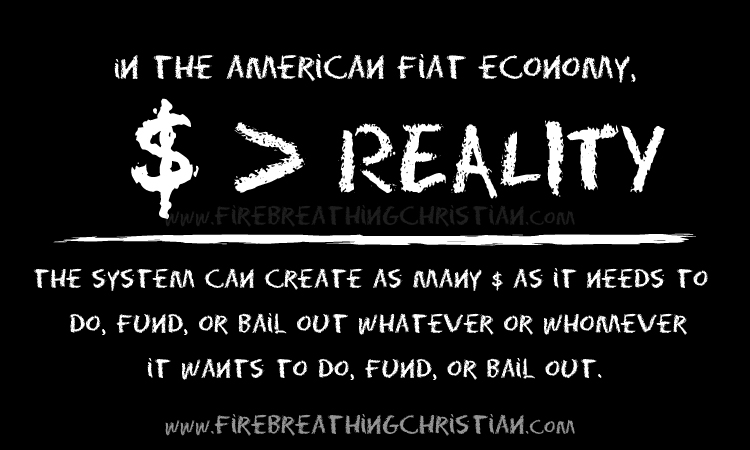 In America, the dollar literally trumps reality. At least for now, until it inevitably comes crashing down under the unbreakable laws of economics as authored, defined and sustained by God.

This fundamental unreality of our present faked reality in America came to mind again in light of a recent statement made by a frustrated Hillary Clinton.

The Washington Post recently ran a piece chronicling the latest wave of squabbling between Hillary Clinton and Bernie Sanders as they enter the home stretch leading to the now-critical New York state Democrat Party primary. Well into the article, there appeared the following:

. . . Clinton did not try to disguise her frustration with Sanders, which bordered on scorn.

“Like a lot of people, I am concerned that some of his ideas just won’t work, because the numbers don’t add up”

The numbers don’t add up?

The numbers of dollars that will be required for The Bern to fund his policies?

But why is that a problem? We all know  – or ought to know – that the dollars in question are literally whipped up and fabricated out of nothingness at the whim of The System…the same System that now would have us narrowed down to Clinton, Cruz, Trump and Sanders as our four “viable” saviors.

How do Republicans and Democrats relentlessly grow the power of the State – their power – through endless programs and wars supposedly designed to “take care of us” and “keep us safe”?

They all employ the black satanic magic of fiat economics to justify, protect, and expand their power generation after generation.

Until we repent and reject the fiat-fueled plans of our favorite fiat-fueled politicians, we will be most to blame for the even darker times soon coming to our children and grandchildren.