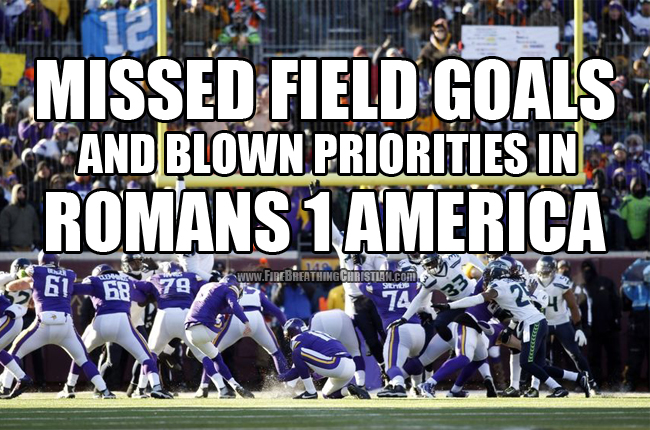 Who says American “Christians” can’t get all fired up and culturally engaged in dramatic fashion? Who says that tens of millions of professing Christian evangelicals in America can’t hoot, howl, and passionately engage anyone within shouting distance when the subject of consideration is something that really matters to them? Who says American “Christians” can’t be loud, clear, agitated and downright argumentative when the topic of focus is something very precious to their hearts?

For anyone wondering if the professing Christians who dominate the modern American cultural landscape were capable of loud, aggressive, impassioned engagement, there can be no doubt that the answer is yes.

Tens of millions of professing Christians in America are passionate. They are engaged. They are educated, informed, and most actively involved on every level – economic, intellectual, emotional…you name it.

They will spend truckloads of money, time, and passion for the sake of their cherished cause.

And what is this cause?

The exaltation of Christ as Lord in practice when it comes to our approach to civil government? (See: Dear America: Jesus isn’t running for King and His Law isn’t “up for a vote” either. Repent accordingly.)

American “Christians” overwhelmingly tend to support and feed their children to the satanic model of the pursuit of knowledge (AKA “education”) as embraced by the American State-controlled children’s “education” system. (See: Statism 101: State-run “education” makes a State-dependent population.)

Maybe advancing the cause of Christ as Lord over law, logic, business, and economics? (See: Do we actually believe that God’s Law is law? Or do we not?)

Back in the summer of ’14, we posted Fiat Bread and Football Circuses in Romans 1 America, wherein we asked and answered some questions that seem to be even more relevant today than they were a year and a half ago:

As the Monopoly Dollar-fueled global fiat economic system teeters on the brink, as the American military lurches from war to war abroad, and as the Orwellian American NSA Security State continues its rollout over the homeland, what is the one question we are all now programmed to purposefully ponder right on cue with all the passion we can muster, like well handled Pavlovian rats?

As we are led by the nose to bomb and invade the Middle East (again) to “save the children” from the murderous horde known as (US-funded/trained) Islamic State while simultaneously using our police to protect mass baby butchering facilities scattered openly all around our land, what is the question we are now called to entertain with single-minded focus?

As we watch fictional economics deployed to prop up the value of stocks and assets so that the comfortable can remain comfortable and the in-control can remain in control while the simultaneously inflated prices of things like food drive the struggling masses more and more into the slavery of State dependence, what is the question above all questions promoted above all others throughout “the land of the free” and the home of the NSA?

Can there be any doubt?

Is there any question as to The Question?

What could it possibly be, but…:

Are you ready for some football?!

Yes! It is time – time once again for the Greatest (and most spectacular) Distraction on Earth (or at least North America)!

As I said back in that post and will repeat now: I do love me some football. Football is not the problem.

The problem that seems to become more ridiculously acute and therefore more painfully pathetic with each passing football season here in the NFL-obsessed “land of the free” and home of the NSA is that we’ve been purposefully programmed into compliant little drones who are quite happy (thrilled, even) to loudly and proudly vent our passion, emotion, and devotion in all of the wrong directions while just as steadfastly refusing to bring our emotional, intellectual, and economic ammunition to bear in the areas that are most important to advancing the Kingdom of God right here and now in accordance with the Gospel-fueled Great Commission.

This week’s reminder of our sad state came by way of the Minnesota Vikings’ narrow (10-9) home loss to the Seattle Seattle Seahawks after a heartbreaker of a missed “chip shot” field goal in the closing moments of the game.

From Duluth west to Moorhead, from Warroad up near the Manitoba border south to Albert Lea, on the road to Iowa, the good people of Minnesota are in pain this morning. That is nothing compared to the pain of Blair Walsh. After the worst moment of Walsh’s professional life Sunday afternoon, he answered question after question about it, for 12 minutes or so in the Vikings’ locker room. Then Walsh sat at his locker. And he started to cry, and couldn’t stop even when teammates came over and tried to tell him it’d be okay.

I texted Paul Allen, the Vikings’ fine play-by-play man who loves the franchise like few announcers love their teams, an hour after Seattle 10, Minnesota 9, and asked him if he could call me. “I cried,” he texted back.

The “good people of Minnesota are in pain this morning”.

All over the state, they’re “in pain”.

Many men are crying.

Are these many Minnesota men in pain and crying over the thousands of baby boys and girls “legally” murdered in openly operating baby mass butchering businesses over Wildcard Weekend all across the fruited plain?

Nah. Not so much.

Are they in pain and weeping over the assault upon family, marriage, and even gender at the hands of corporations like Disney, Disney-owned ESPN, and the NFL itself? (See: The NCAA, the NFL, and why your grandkids will be pro-gay.)

King continued to cover the tear-inducing pain and heartbreak of the people of Minnesota:

I wanted to hear Allen’s call of the fateful play, which was on Deadspin. I clicked.

“WALSH’S KICK IS UP AND IT IS … NOGOODHEMISSEDIT!!!”

“ARE YOU KIDDING ME! THE SEASON CAN’T END LIKE THAT!!! He missed it left!”

Allen trying to take it in, words coming out like lava.

And then, reality. Professionalism. Flatlined words. Just the facts.

“And the Seattle Seahawks are off to Charlotte. Blair Walsh missed a 27-yard field goal and the Minnesota Vikings are going to lose 10 to 9.”

Sunday night, on the phone, Allen said, “It’s an absolute aorta-smasher. Do you realize before that kick, NFL kickers had attempted 191 field goals of 27 yards or less this year—and made 189 of them? That kick was a 99 percent lock. This is the kicker who led the NFL in field goals made this year. He already made three in this game. I mean, people didn’t have high expectations coming into this game, but when you’re a 27-yard kick away from advancing to play Arizona …”

So yeah, the stakes were high.

For a football game.

Again: Football is fine. Personally, I like it quite a lot.

But it is a game.

It is a relatively small thing.

It is not worthy of anywhere near the place we’ve given it, and our ridiculously tragicomedic inability to prioritize at anything resembling a reasonable, responsible adult level is one of the surest, clearest signs that God has given us over to ourselves. His wrath is upon us.

How can we as professing Christians in America cry – literally cry – about missed field goals in football games while simultaneously doing so very little to advance the Crown Rights of King Jesus in the realms of law, economics, education, art, and civil government, all while “wondering” why the world is going to hell around us?

Lord willing, His people in America will lead the way in repentance and submission to Christ as King in practice over law, economics, business, and everything else so that, by His grace, we might one day be able to enjoy things like games and football properly, all to the glory of God and all to the benefit of His people.

Lord willing, we will soon weep and repent over the many things we’ve done (and modeled for a watching world) to mock God and resist His rule over our lives in detail.

Lord willing, He will grace us with a Spirit of broken repentance while there is yet time so that we might vigorously engage the realms that matter most,rather than crying like babies and spending ourselves over the things that matter least.