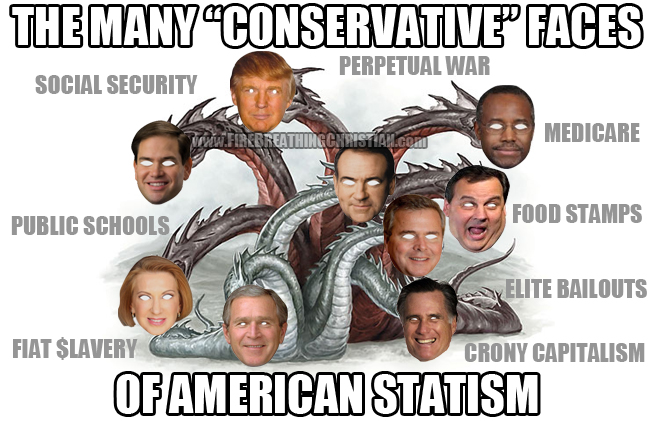 Welcome to the New Conservatism – a “conservatism” that is flat out socialistic.

Just look at all of the “conservatives” on the stage at Wednesday’s GOP “debate” and you can’t help but notice that there’s no debate at all as to the “necessity” of preserving, strengthening, and/or expanding one rank socialistic/Marxist program after another. From Social Security and State-run children’s “education” (lifted directly from the tenth plank of The Communist Manifesto, by the way) on down, the preferred political party of the vast majority of professing Christians in America is arguably the most effective advocate for Socialism in America.

But how can this be so with the Democrat Party being what it is?

Please think about that.

Back in August as we ramped up for the first televised GOP “debate” of this particular controlled/contrived political season, we posted The Ultimate (and completely safe) “Debate”-Watchers’ Drinking Game, which centered on the following triggers:

Obviously, this is not a game that should normally be played with alcoholic beverages. For our purposes here, however, it really won’t matter. You can use any beverage you like, from hard liquor on down, without any fear of violating the beautiful and important biblical command to avoid drunkenness.In The Ultimate “Debate”-Watchers’ Drinking Game, the triggers are as follows:

So there you have it.These are the rules.These are the drink triggers.And these are the reasons why even the most vigorously Southern Baptist or Church of Christ type can play The Ultimate “Debate”-Watchers’ Drinking Game without fear of even one drop of alcohol touching their lips.

Shortly before introducing the “Debate”-Watchers’ Drinking Game, we posted Welcome to the 2016 Parade of Republican Statists, wherein we chronicled some of the rather obvious and even flagrant (yet diligently ignored by masses of supportive  professing conservative Christians) manifestations of Statism permeating the GOP field, including the following objectively verifiable observations:

Did even a single Republican “conservative” President wannabe discuss how they were going to get the State out of the business of molding the minds and worldviews of children?

Did a single solitary one of ’em describe how they would phase out the overtly Socialist Social Security program, which is designed to make people dependent on the State?

What about the Socialist Medicare program?

Apparently, that’s a keeper, too. I’m sure they’ll “fix” it, though.

Maybe one of them advocated tackling the Marxist/Communist Manifesto fueled concept of property tax, by which we now coercively fund the equally Communistic concept of State-run children’s “education”? (See: Why home ownership will never be allowed in “the land of the free” and the home of the NSA.)

Not on these guys’ watch, anyway.

Republican representatives of the Pagan Political Right are not only uncommitted to eliminating these flagrantly Marxist/Statist programs. They are committed to preserving them.

You know, “making them work” using “conservative” principles and such. (See: How’s that Pagan “conservatism” workin’ out for ya, Christian?)

And why is this so?

Why are these Republicans just as sure to lead us deeper into anti-Christian Statism as their “opponents” on the Democrat side of the Corporate-owned stage?

And then we moved into the all-important solution phase:

So how are we going to combat these Statist advocates?

What are we actually going to do?

How are we going to turn the corner and gain ground against the very systems that these “conservative” Statists are out to “fix” and sustain forever?

Well, for starters, we need to stop looking to them for answers.

We need to stop obsessing over The All-American Political Puppet Show.

Oh sure, we can keep up with it and stay informed at a basic level, but we have to refuse to buy into this controlled, contrived political game.

We have to focus on our self-government. We have to be in the Word. We have to be people of the Word. We have to be thinking about the Nature of God as revealed in His Word and how it informs us as to what is true and good in law, politics, art, economics, civil government and everything else. We have to identify and personally repent of our past and present sins. We have to constantly strive to reform our personal behavior in a biblical manner. (See: Presuppositional Law: Where we begin with law determines where we end.)

We have to focus on our family-government. The primary target of the Statist is the biblical family. We must strive to live, work, pursue and apply knowledge in a Christ-centered manner. We have to build strong families who are not dependent upon anything that the State and Statists use to “help” people into bondage.

We must focus on our church-government. We have to be active, committed, submissive, serving members in a local body. We cannot expect to credibly critique, much less productively reform, a wildly wayward church in America if we are not personally willing to obey Christ and be involved in a local body of believers and submissive to local church leadership. Only through biblical submission and participation in the local body of Christ can we hope to productively reform the church from its present weak and pathetic condition into a true force for the Gospel-fueled Great Commission in our lives, homes, communities and culture.

After these steps are taken and pursued by the grace of God, then we will be well positioned to influence our communities and local civil governments in an explicitly Christ-centered manner.

This culture is absolutely, positively not going to be saved from the top-down by electing the “least of all evil” Pagan Political Left or Right “leaders” again.

Statism enslaves, conquers and kills from the top down, and it’s happy to do so using any party, flag or brand of patriotism necessary.

In infinite contrast, the Gospel-fueled Great Commission truly transforms people, families, communities and cultures by the grace of God through His faithful people’s pursuit, proclamation and application of His Nature as revealed in His Word. (See: Jesus Conquers Everything.)

As a former slave to the Pagan Right/Pagan Left political paradigm that has been so effectively used to control and direct our culture down an increasingly dark, anti-Christian path, I respectfully submit these things for your thoughtful, prayerful consideration.

Please think about them.

Please pray over them.

Please test them all in light of the perfect Word of God.

Then repent where necessary, re-focus your passion and spend yourself accordingly in light of that Word.

That is how Statism will fall.

That is how we will win…all by God’s grace, all for His glory, and all to our eternal (and temporal) benefit.