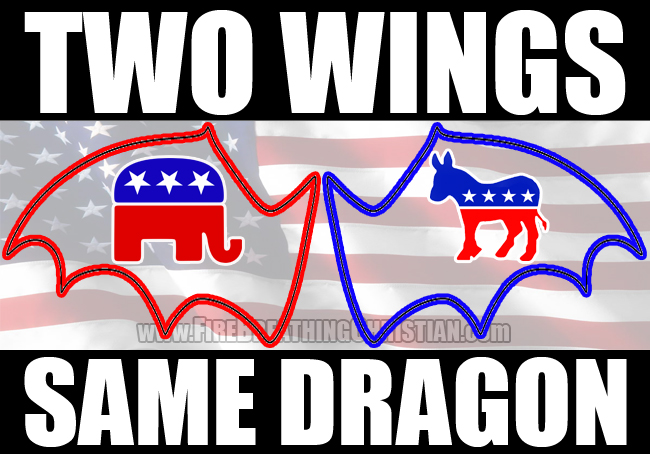 It’s “State of the Union” season in America, that special time when each head of the anti-Christian Progressive dragon that is enslaving and devouring us more with each passing day takes a moment to tell us what’s going on, why it’s happening, and how wonderful it’ll all be in the end.

In tonight’s installment, we will first hear from the Left Head of the two-headed dragon, since that figurehead is the one that’s been assigned the role of “official leader” this time ’round the track. Then, after the Left Head has spoken, we will hear a “response” from the Right Head. The Right Head will appear to be critical of and contrary to the Left Head in many ways, and some of them will even be real…just not any of the ones that matter most.

After the Dragon finishes putting on its State of the Union Show, its legions of media and propaganda systems will kick into gear, aimed at perpetuating our trance and occupying our minds with the “drama” going on between the two heads of the dragon. Fox News, CNN, and MSNBC, along with the still-clinging-to-life-and-perceived-credibility “major networks” will immediately begin to dissect and examine what each head of the dragon has just said. Talk radio through the night and tomorrow and the rest of the week will be abuzz with what the Left Head of the dragon said, what the Right Head of the dragon then said in response, and why it is all soooooo important to us – why it should shape our political thoughts, plans, and actions.

This is how we play – and have been played – in America for generations now…and, as with all dark things allowed to take root in and define our culture, this has only happened because the professing Christian church in America has enabled and encouraged it to do so.

The “church” and its loudly professing, often very “conservative Christian” members are some of the most ardent defenders and worshipers of the two-headed beast that is now so obviously leading us and future generations into a place of incredible darkness defined by the counterfeit light of totalitarianism.

As Christians, the first thing we need to know about this present desperate situation in American politics is that it is our fault most. We are rightly to blame more than any pagan, Democrat, Leftist, Muslim, or homosexuality advocate. (See: Judgment begins with the Church…not the Democrats.)

So it is that we must lead the way toward redemption and restoration through our personal repentance of any active or passive support we’ve offered this beast.

Then, no matter who we are, how much, or how little perceived power we might have as we strive to face this many tentacled monster in a God glorifying manner, there are two things that each of us can and must do to make a very real impact on this culture for Christ and against the dragon:

Obviously these two simple – yet profoundly powerful steps toward changing America for the better by the Gospel and grace of God – are not going to be found promoted (or even acknowledged) in any of the hours upon hours upon days upon weeks of never-ending political talk from the secular (and dragon-owned) Left or Right on Fox News, CNN, Rush Limbaugh, etc. They are not about to lead us there, to the only actual solution for the sin, pride, and unrepentance that is even now murdering what’s left of our culture before our eyes. Nope, the dragon-serving systems, personalities, and “experts” have “better ideas”…more “realistic” approaches…and yada yada yada…

We’ve heard it all before. And we will hear yet another version of it again this week…and the next…and the next…

The question for Christians is: What are we going to do about it?

Are we going to keep playing along? Are we going to pass once again on repentance and restoration, clinging instead to our pride and the many American idols that we’ve been conditioned to adore and worship? (See: The America Idol: How “Christians” Worship and Enable the Anti-Christ State.)

Or are we finally going to call out the beast? (Both heads!)

Are we finally going to confront it and its systems with the Gospel-fueled Great Commission of Christ the King?

The true “State of the Union” hangs on the answer to that question…no matter how hard the dragon pretends (and would have us pretend) otherwise.