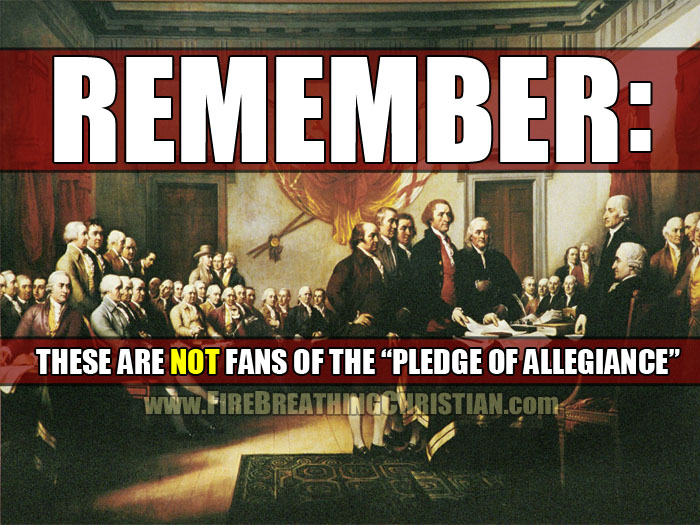 Here’s a question that modern day America worshippers don’t want you to ask: Would the Founding Fathers pledge their undying personal loyalty to the indivisible power of the State above them?

Would they consider such a thing?

Would they make the time to take such a pledge?

You know, when they’re not doing other stuff, like writing the Declaration of Independence or fighting a war for independence from…who was that again?

The State above them!

Would the Founding Fathers say the modern American Pledge of Allegiance? (A pledge written by a Socialist in the late 1800s for the purpose of promoting the use of American flags in State-run public schools and helping to prevent any future Founding Father-like pursuits of independence from centralized power in Washington DC.)

This seems like a good question to be asking with all the flag and “respect for America” obsession flying around here lately in the “land of the free” and the home of the NSA.

If the Founding Fathers became the Founding Fathers by [*ahem*] emphatically and dramatically rejecting the notion of indivisible power in the State above them, then why are so many self-identified conservative Christian Americans so completely committed to precisely the opposite approach where the American State is concerned?

The answer isn’t tricky or hard to find. It’s super simple and shining brightly for all to see.

We’ve made the American State our god in practice, trusting in it as the ultimate definer, provider, and sustainer of freedom, liberty, privacy, prosperity, and security here on earth…which is why we’re losing all of those things hand over fist, of course.

These are things to think about the next time we’re prompted to pledge and sing on cue like trained chimps.

The Founding Fathers dared to measure things like liberty, freedom, and privacy by objective standards over and against the propaganda of the State above them.

Then they acted accordingly…which is precisely why the modern American State doesn’t want us to think about these things.