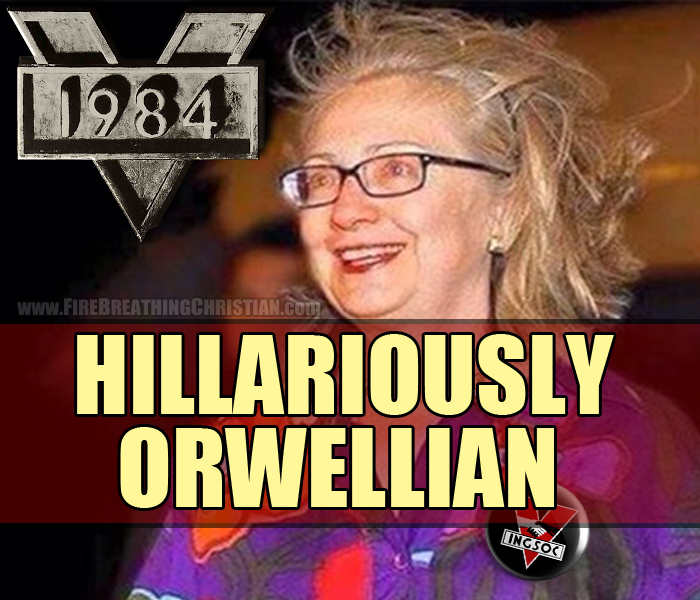 As any of us who’ve listened to “Progressives” address Scripture know all too well, reading comprehension isn’t really “a thing” on the Left. For all the arrogant, snide, and prideful preening common to pseudo-intellectual Progressives, more often than not, the more they talk, the more they make plain that they don’t know much about what they’re talking about.

Which, of course, makes them quite entertaining to listen to at times, in a slow-motion trainwreck sort of way.

The latest reminder of this comes by way of Hillary’s new book, What Happened, in which she has what can (and should) be categorized as a hysterically Orwellian take on Orwell’s classic 1984.

Here’s how an article at ZeroHedge explored Hillary’s remarkable (and remarkably funny)disconnect from reality:

Since the official release of Hillary’s new book “What Happened” yesterday, our sense of logic and rational thought has been under constant assault by a steady stream of ‘Hillary-isms’ which provide some rather dark insights into the bizarro world in which she lives.

That said, we’ve seen nothing that tops the following excerpt in which Hillary offers up her expert opinion on the key life lesson that should be learned from “1984”, namely that we should trust and rely on “our leaders, the press, and experts who seek to guide public policy.”

Here’s a direct quote from the book:

“Attempting to define reality is a core feature of authoritarianism.  This is what the Soviets did when they erased political dissidents from historical photos.  This is what happens in George Orwell’s classic novel “Nineteen Eighty-Four,” when a torturer holds up four fingers and delivers electric shocks until his prisoner see five fingers as ordered.  The goal is to make you question logic and reason and to sow mistrust toward exactly the people we need to rely on: our leaders, the press, experts who seek to guide public policy based on evidence, ourselves.”

I hope you were sitting down for that one. It’s a real beaut, am I right?

But is it surprising?

That Hillary actually thinks this way is no surprise at all. She’s a laughably (and dangerously) confused, warped shell of a woman.

What might be just a little surprising is that this hilariously Orwellian take on Orwell’s best known work would make it into print in Hillary’s new book.

This is what being “given over” does to a person (see: Romans 1). It makes ’em more and more stupid by the minute.

When we choose to have such people lead us, we are begging for the reality of Orwell’s 1984…which is probably why Hillary would like to recast the crystal clear message and meaning of that book (along with countless others).

So what’s the lesson here?

Two good ones to keep in mind: