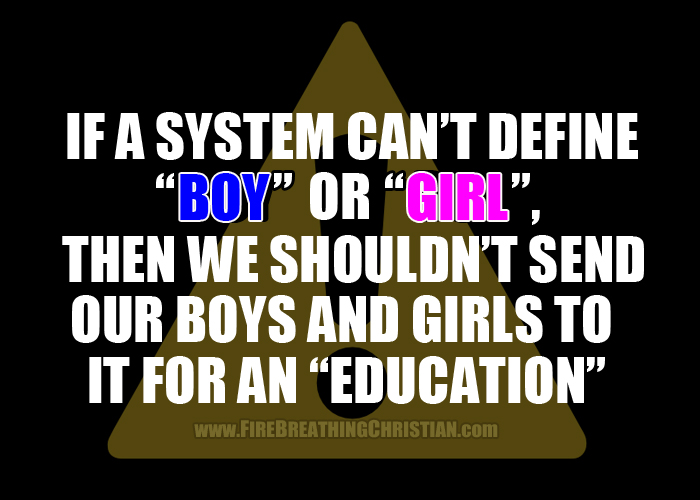 What is a boy?

What is a girl?

These days, nobody seems to know, particularly the “professionals” running the State-managed children’s education system in America. After many generations of immersion in a State-run, Corporate-managed approach to education lifted from the serpent’s tongue in Genesis 3, we’re so far down the rat-hole of anti-Christian, State-centered discipleship that we can’t even reliably define concepts like “boy” and “girl”.

Which leads us neatly (if painfully) to two other simple terms in need of some serious contemplation these days: Education and idiocy.

So what is education?

And what is an idiot?

Education, in a nutshell, is the pursuit of knowledge of God through the examination and understanding of all that He has made as a reflection of His Nature throughout His creation. Language, logic, art, history, philosophy, morality, mathematics, ethics, business and economics are all about Him. They all belong to Him. They were all made by Him, through Him, and for Him (see: Colossians 1:15-20). Every material and immaterial thing can only be rightly and ultimately understood by its unavoidable association with and complete reliance upon Him. To pretend to pursue true, complete knowledge of any aspect of His creation apart from explicit acknowledgement of and submission to Him is, in a word, idiotic…which leads to our second question…

What is an idiot?

An idiot is a person who freely chooses to send their little boy or girl off to be “educated” by a system so fundamentally satanic (and stupid) that it can no longer coherently define, much less defend, basic terms like “boy” and “girl”.

An idiot is someone who rages against the decline of American culture and civilization while freely (and often quite proudly) shipping off their little ones to a system openly at war with God and actively engaged in the destruction of…well…everything, language included, from marriage and family right on down to notions of gender, boyhood, and girlhood.

That’s hard, I know. It hurts feelings. It’s offensive and/or insulting to people.

But is it true?

Shouldn’t that matter more than our feelings?

Aren’t our children counting on us to not to be idiots…and not to send them off to be trained in a system designed to make them idiots, too?

It’s time to confront (rather than deny) the idiot cycle in America, beginning with professing Christians in America who for far too long have been chief enablers and defenders of a system rooted in a satanic foundation that is now, after many long years of cowardly abdication by professing Christians, leading western civilization down the latter stages of a path that it was always designed and destined to pursue.

It’s time to repent, believe in Christ as King, and submit to Him in educational practice.

Anything else – any other approach to “fixing” children’s education – is and will forever be dangerous, destructive, and idiotic.

That’s just how things work in God’s creation…and we shouldn’t want it any other way.

So let’s stop being idiots.

Let’s stop sending our children off to an idiotic system for “education”.

Let’s start living – and educating – as though we actually believed that Jesus is Lord.