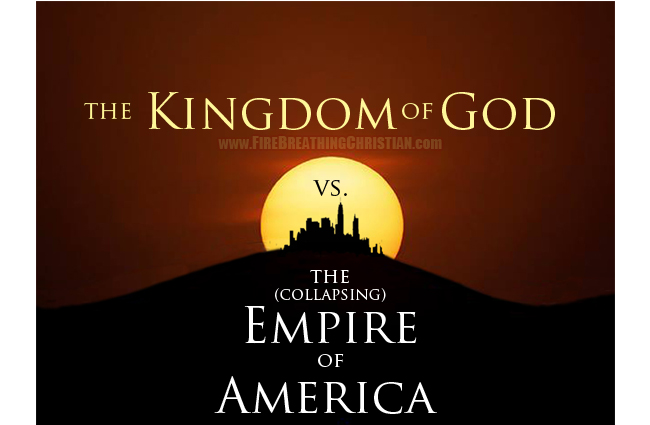 As we watch a proud, unrepentant people cling to the idol of the American State and we see the judgment of the one true God come down upon that idol and its worshippers, we are well served to praise the King of kings for the peace, purpose, and mission that He has given His people right here and now in the middle of this whole soon-to-pass mess.

The fact that He’s purposefully placed and perfectly equipped each of His people “for such a time as this” should inspire matchless calm, confidence, and joy even as we engage the dead religion of American Statism in the midst of its last, desperate attempts to secure the American State as the one true god under whom all other (lesser) gods must bow.

For those of us who truly love America and love Americans, this is a very challenging and critical time. It has never been more vital that we lovingly confront and correct the State-as-messiah counterfeit gospel that has come to define our culture through generations of State-run “education” and Corporate-directed pop-culture programming. It has never been more important to torch the curtains hiding the little men who would be gods that are operating the fictional political and economic constructs that are being used to perpetuate our bondage by keeping us focused on anything but Christ as the solution to all that ails us.

The American State is being held high as our savior.

The American State is being embraced as the educator of our children.

The American State is being promoted as the author and sustainer of our freedom, liberty, law, and security.

The American State has perverted and corrupted the concepts of law, liberty, freedom, and life itself as no other people before…all while claiming the status of “Christian nation” and stamping “in God we trust” on the fake money it manufactures out of thin air to control and enslave people and cultures not only at home, but across the globe.

The American State is being exalted as our god in practice if not in title…though the title will inevitably follow once the practice runs its course.

The good news is this: The Author, Definer, and Sustainer of law, family, gender, marriage, economics, civil government, and life itself will not have it.

He will not tolerate its evil indefinitely.

He will not allow its prideful march to continue for much longer.

He will not allow it to continue its use of black magic fiat economics to enslave the masses and empower an anti-Christian elite (many of whom claim to be Christians, of course).

He will not allow the temples (some call them “schools”) of the American State to continue “educating” children in accordance with a philosophy of the pursuit of knowledge lifted directly from the serpent’s tongue in Eden (and subsequently found in the tenth plank of The Communist Manifesto).

He will not allow the beast of the American State to pillage the institutions of family and marriage indefinitely.

He will not allow the mass murder of baby boys and girls in openly operating, “legally” protected child-butchering facilities to go on for much longer.

He will not allow America to continue.

He will bring it to an end; an end that will demonstrate once again the unbreakable nature of His Law in, over, and throughout every part and aspect of His creation.

The Republican Party, Pagan Conservatism, and Donald Trump cannot “Make America Great Again”, regardless of what Rush Limbaugh or Fox News might tell you.

Apart from repentance and submission to Christ as King in practice and in detail in every realm of life, the American Empire is coming down hard…and we as Christians shouldn’t want it any other way. (For more on this critical and beautiful truth, please read Roaring into Post-America Christianity.)

The land under each and every American’s feet belongs to Him.

The air above that land and the oceans that surround it belong to Him.

The law, economics, arts, and education that Americans pervert so arrogantly and routinely belong to Him.

Even now, the wrath of God is pouring out upon a proud an unrepentant “We the People” of America. Even now, the great opportunity to repent, believe, and be saved is being extended. But that extension of grace will not go on forever.

America came and America will go, perhaps quite soon by the look of things at this particular moment.

But the Kingdom of God will endure forever, conquering and reconciling every corner of creation, taking every thought and practice captive to Christ.

The Gospel-fueled Great Commission will triumph in the land presently known as America…and everywhere else.

Every knee will bow to King Jesus.

Every tongue will confess the majesty and beauty of the Lord.

So get with the unstoppable, inevitable, and unavoidable program, America…while you have the chance.