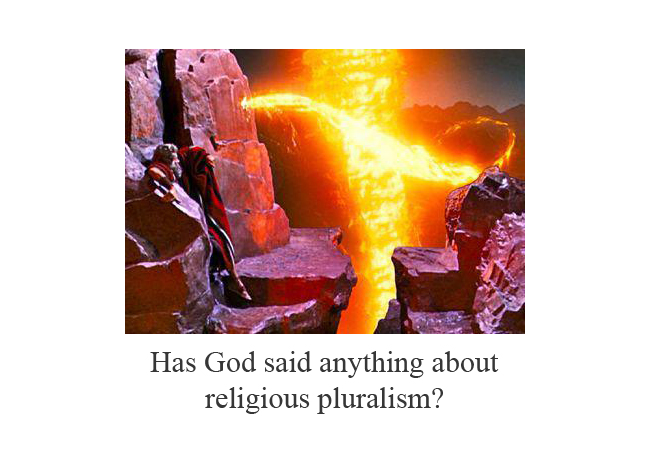 This may be news to most American “Christians” and most, if not all, of the “conservative Christian” Presidential candidates that they are likely to overwhelmingly support in the latest Pagan Right pitch to “save America”, but, believe it or not: There is no “God-given right” to openly worship false gods.

While we’re on the subject, it’s probably also important to note that “rights” are only as good (or as real) as the God giving ’em, and that the one and only true and living God actually despises and forbids the open worship of false gods anywhere in His creation.

And yes, His creation includes ‘Merica.

‘Merica doesn’t own and therefore doesn’t get to define how reality works in ‘Merica.

‘Mericans don’t own and therefore don’t get to define how reality works in ‘Merica.

God defines – He personifies – reality, for ‘Merica and all else in His creation.

He has said with crystal clarity that the open worship of false gods is forbidden.

We can either repent of our proud ‘Merican rebellion in this regard, or we can continue to be crushed under the wrath of the living God that we proudly mock every time we claim to have “the right” to do that which He has explicitly forbidden.

[Tweet “There is no ‘God-given right’ to worship false gods.”]

Evidence of His wrath pouring down upon us is evident in every area of life: Family, politics, church, art, civil government, economics, law…

It’s impossible to miss. (See: Well color me satanic and call me America! (Or: How our cherished religious tolerance for false gods will ultimately kill us.) and Openly Reject God’s First Commandment? YES! WE! CAN!)

Unless we are still infatuated with our sin and blinded by our pride. (See: Why Americans don’t do repentance. and Singing Sweet, Sweet Lies in the “Land of the Free” and the Home of the NSA.)

The bondage and hell of Statism is the inevitable reward of our pride and rebellion, and even the most dull-minded among us can sense its coming. Yet all we seem to want to do at this point to fight the looming doom of anti-Christian Statism is – unbelievably – double down on “core American (and satanic) principles” like the “God-given right” to openly worship false gods.

May God – the real One – save America, by either breaking her into submission or breaking her into a million pieces…some of which may, by His grace, actually strive to obey Him as He has lovingly commanded. (See: Roaring into Post-America Christianity.)