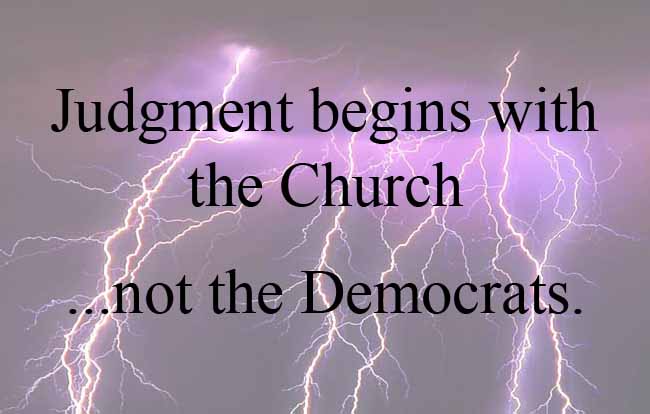 Like most of you who are reading this, when it comes to politics, I consider myself to be very conservative. I consider myself to be so because, by the grace of God and to the best of my knowledge and ability, I seek to submit my political understanding to biblical standards and have, as a result, been led toward a very conservative political worldview not only in theory, word, or propaganda, but also in deed.

I actively oppose everything from fiat currency (“money” made out of thin air by a few to purchase the control of all others) and Social Security to perpetual war, Medicare, and the State-control of children’s “education”. I oppose these things as best I am able in part because conformity with Scripture requires coherence between what is claimed in word and what is acted out in deed. So here I am, doing my best to share this pursuit with you fine folks here at the FBC blog…

Where I might be different from most of you is in my not considering”conservative” to be a synonym for “Socialist – but less Socialist than a Democrat”, which seems to be the way that roughly 95% of self-identified “conservative Christians” in America define conservatism.

Most of these professing “conservative Christians” in America nowadays are thoroughly socialistic in their worldview. They overwhelmingly support State-controlled children’s “education” (which is straight out of the Communist Manifesto), and they are usually all about “preserving” or “strengthening” such flagrantly socialistic tools of State empowerment and citizen control as Social Security and Medicare.

Or so they proudly proclaim, anyway.

This is what happens when a people become separated from reality.

So how is it that it came to this in America, particularly for the vast majority of professing Christians who are active in the political realm?

How did millions upon millions of supposedly conservative folks become converted into actual Socialists in practice?

The answer is simple and predictable: They abandoned Scripture as their guide in practice to the issues and subjects considered to be under the umbrella of politics or government. In doing so, they abandoned light for darkness and are now so far down the darkened path that they not only can no longer see the light, but they cannot even remember what it looks or feels like.

This is what multi-generational rebellion does.

This is where it leads.

We’ve had a looooong run of material prosperity and a prime role on the global stage as America, and this long run has been mistaken by many as validation by God.

This assumed validation in conjunction with an increasing disdain for His Word as an actual standard and binding authority in practice in every realm of life has led us to where we are right now in 2014 America.

Our ancestors of many generations past knew all too well that the one true God frequently punished and even destroyed rebellious cultures with plagues, drought, war, and wicked leadership. Yet, in practice, we treat these realities as stories, fables, or fairy tales as we dismiss their lessons even in the face of Ebola, severe drought, and perpetual wars purposefully pursued through decades of wicked leadership.

And what is the typical “conservative Christian” response to all of this?

Why, to complain about Obama, of course!

What else is there?

Personal repentance? Not so much. But attack the Democrats and Obama…oh yeah!

So what’s the problem with this? Certainly Obama is one of the wicked leaders mentioned earlier, right? And surely the Democrat Party is a target rich environment where openly unbiblical political advocacy and pursuits are concerned, right?

Yes, and on both counts. I agree completely.

But the problem with making them the primary issue rather than our rebellion against God the primary issue is that, based on the biblical presentation as to why, how, and through whom a culture rises or falls, we are completely missing the point.

When we refuse to repent of our personal rebellion (and support of others’ rebellion) against His crystal clear teachings on the roles, responsibilities, and limitations of the family, church, and state, then we are the primary problem and reason for the perversion and collapse of those institutions.

When we refuse to repent of our personal rejection (or support of others’ rejection) of God’s prohibition of allowing the open worship of false gods in our land, then we are the primary reason why the worldviews of those false gods and their disciples have come to corrupt and define our culture.

For it is time for judgment to begin at the household of God; and if it begins with us, what will be the outcome for those who do not obey the gospel of God?  ~ 1 Peter 4:17

The ongoing collapse and looming death of American culture is not primarily Barack Obama’s, Bill Clinton’s, or the Democrat Party’s fault.

The blame belongs first and most with the professing Christian Church in America.

We are to blame.

The wicked leadership of Barack Obama is God’s judgment upon us for our rebellion against Him.

If this is true, could anything be more important in a political context or any other?

And yet this is the last thing you will hear, read, or see from the secular “experts” and entertainers used so successfully for so long to distract us from this vital, core reality. The controlled, contrived political and pop-culture puppet shows that we have been conditioned to love so much are intentionally filled with words, images, and ideas that “itching ears” love to hear, all while religiously avoiding the essential truths that we need to hear the most.

How can we “make disciples of the nations” and “teach them all” that Christ the King has commanded them to do in His Word when we have no appetite for such self-sacrificial, idol-crushing pursuits ourselves? How can we make Christian disciples when we don’t even want to be disciples as Christ defines them?

The Gospel and Great Commission will only find footing in America again if and when His people lead the way.

We cannot wait for pagans, Democrats, or phony “Christian conservatives” to get their act together.

Our obedience to Christ cannot be contingent upon theirs

We are called to seek the will of the Lord as revealed in His Word, submit to what He graciously shows us there, and then strive, by His grace, to faithfully apply that perfect Word in every realm of creation in which He has placed us.

Until we repent and submit to Christ the King as King, this culture is, and should be, doomed.

Judgment begins with the Church…not the Democrats.