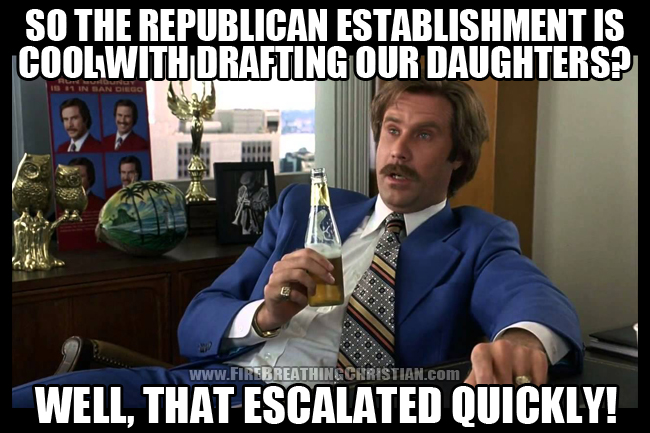 One of the many things that wasn’t debated at Saturday night’s GOP “debate” was the presumption of American State ownership of the American people when it comes to the notion of a military draft. These days, it’s just a given that the State owns everything, including even your body, should it decide that there is a slot in its perpetual war machine that “needs” to be filled by your body, all “for the good of the collective”, of course. That’s just how “conservatism” rolls here in “the land of the free” these days.

The State owns everything.

The State owns everyone.

Or so it thinks (and wants us to think), anyway.

Which is where State-run children’s “education” comes in, embedding from childhood on the presuppositions that are essential to fostering a State-centered worldview, thereby creating the submissive, compliant, domesticated and utterly State-dependent culture that we have now in America.

After generations of Statist indoctrination at Statist Temples (“schools”), we have arrived at a point where the State is able to openly claim ownership over our homes, our bodies, and everything else, all while programming us to sing on cue about living in a “land of the free”, pledge on cue our allegiance to the indivisible political power of the American State, and ramble on at the drop of a hat about the freedom-enabling awesomeness of the American State.

So it shouldn’t come as any surprise at all that our beloved Statist “leaders” on the Pagan Political Right took roughly three tenths of a second to roll over and accommodate the flagrantly anti-Christ, pro-Statist aim of registering women for the unbiblical draft.

In the wake of last weekend’s GOP/Statist “debate”, which touched on this subject in a revealing manner, Doug Wilson chimed in with some helpful observations:

Once you have signed off on the nation/state conscripting your daughters to go serve in combat roles, whatever it was you thought you were conserving — thus allowing you to call yourself a conservative — has had a fork stuck in it and is done. Nothing really to conserve any more.

A nation that conscripts its daughters for its defense is a nation that no longer deserves a defense.

Let that one soak in.

Let’s wade into this from the shallow end.

First, when God had His people go to war, only the men were mustered. Males, twenty years old and up, were mustered for war (e.g. 2 Sam. 24:9). Incidentally, not to get sidetracked, but forced conscription for men is not biblical either. In Scripture the men were mustered, but were not forced to fight. If they did not want to fight, even for dishonorable reasons like fear, they were free to go home. So when a government conscripts men, they are forcing them into a vocation that men are in fact called to perform, with the coercion creating an injustice. But when a government conscripts women for combat, that government has declared war on the permanent things. It is degrading to the women involved, and an utter disgrace to the men who allow it to happen.

. . . the Bible flatly prohibits the kind of perverse thinking that would put women into combat. “The woman shall not wear that which pertaineth unto a man, neither shall a man put on a woman’s garment: for all that do so are abomination unto the Lord thy God” (Deut. 22:5). That “which pertaineth unto a man” is a rendering of keli geber, which literally refers to the gear of a warrior. Men are prohibited from chasing after the transvestite kick, whatever that is, and women are prohibited from decking themselves out as an infantryman. It is easy for modern secularists to lump this in with the prohibition of clam chowder, but for those who read the Scriptures with understanding, it should be lumped in with the abominations of sodomy and witchcraft. Unfortunately, many Christians will fall for this latest abomination because it has been artfully decked out in red, white, and blue.

And there you have it – the [ahem] Trump card of American Statism: Patriotism.

That’s what generations of State-run “education” has done for (and to) us.

The American State has taken down marriage.

The American State has taken over our homes.

The American State has emasculated and muted our churches.

The American State has overrun and dominated our culture.

And now the American State is coming for our daughters as it never has before.

On that note, and in response to it, I’d like to echo and amen Doug Wilson’s closing sentiments:

I have argued elsewhere that a man’s central obligation before God is to provide for his family and to protect them. He should bring up his sons to do the same. An essential part of that protection would be to protect your daughters from the appalling policy that would (apparently) be upheld by a President Rubio. So under a President Rubio, it is possible that some of my granddaughters might be drafted. But it is not possible for that to happen without a number of the men around them going to jail first.